That was bizarre. The phone rang twice. I picked it up but they had hung up. It rang again. A woman with what I presume to be an Indian accent spoke:

‘Good morning Sir. May I ask you three questions that will only take up a moment of your time?’
‘Eh. Sure.’
‘When purchasing goods is the price or quality more important?’
‘OK, before I answer that, who do you represent?’
‘Oh, The Irish Research and Development Centre here in Dungarvan.’
‘Sorry, what was that? The Irish Resea..’ (I started typing the name into a browser, my keyboard is noisy)

Weird. Was that some sort of scam?

Addicted to texting? Driving the car getting in the way? Then SMS Racing is for you. Drive around the track while responding to text messages. Complete one lap and you win. The catch is, you have to respond within 10 seconds each time. (via)

A year ago I pondered buying a Sony Ericsson K750i but eventually bought it’s big brother, the Sony Ericsson W810i instead. At the time I was impressed, especially with the panorama function of the camera, but I’ve grown to loath this piece of technology in the year since I bought it. Here’s why.

On the plus side, sound quality is good, battery life is ok. Camera is excellent for what it is. Images are noisy, but it’s packed full of features. I love the panorama function. The included memory stick makes it easy to copy files to and from my PC or Mac.

Would I buy a Sony Ericsson phone again? If they had a sensible keyboard locking sequence, then maybe. As it is, I’m going back to Nokia. For my next phone I would like a bog-standard device that makes calls, can store hundreds of texts, has at least a 2MP camera and a memory card.
Any suggestions?

What happens when someone rings two police stations at the same time on two phones and they hold the phones together? Claire has the answer. Must have been a meteorite hit the lines but they’re alright in Westport and Castlebarr.

Gammagoblin has made a Google Video of the phone call!

Frank thinks the Gardai were busy dealing with meteorites on the line when a certain memo came from Interpol. Oops.

I’ve had a Nokia 6320 or something like that for well over a year so I think it’s about time I treat myself to a mobile phone upgrade on my Meteor account. My brother bought a Sony Ericsson K750i, I had a brief play with it and I’m impressed. This review from last year paints a rosy picture also but it’s only one of a number of phones available from Meteor.

What do I need my mobile phone to do besides the basic calling functions?

Decisions, decisions. I probably won’t get a chance to go into a Meteor store today but maybe sometime over the next few weeks.

Update! I bought the Sony Ericsson W810i. Here’s my mini review and initial impressions. There’s not much between it and the K750i that I can see except:

Initial impressions are good except:

Those are mostly minor problems, and some are from familiarity with Nokia phones. My first phone was a Panasonic and it had the space character on the # key too so I know it’ll become second nature to me eventually. I like the camera. It’s a 2MP sensor, adjustable exposure value, white balance and even has an illuminating light. Movies are stored in 3gp format but I’m sure there are ways of converting them to an online-friendly format if I look. The Walkman app looks promising and I’ll play wih it a little more once I’ve added a few mp3s to the memory stick.

The W810i has a handy panorama feature where the phone will stitch together 3 photos to make one larger image. It displays a semi-transparent portion of the previous image on the left of the screen for overlap purposes to allow you to line up the next shot. It works quite well too. Here’s a shot from O’Brien’s Sandwich Bar in Blackpool shopping center this morning.

Way back in 2004 i posed the question, Do I need a phoneline for Sky Digital? and I can confirm that yes, you do need to keep your Sky box connected for the term of the contract, usually the first year.

Last January I purchased a Sky+ subscription with the multi-room option. I didn’t connect the second box to the phone, mainly because it’s upstairs and I never got around to stringing a phone line to that room. Then, sometime during the last year the phone line to the living room died so both boxes were offline. Oops.

Sky contacted me several times, I bought 2 phoneline extension cables but there was always something more interesting to do than fix a phone line. Fancy that eh?

Last week Sky sent me this letter saying, “sadly, your entitlement to Multiroom pricing has been lost” unless I reconnect the boxes to the phone and ring them.

I’ve been on hold to Sky for the last 32 minutes, only another 30 minutes to go.. 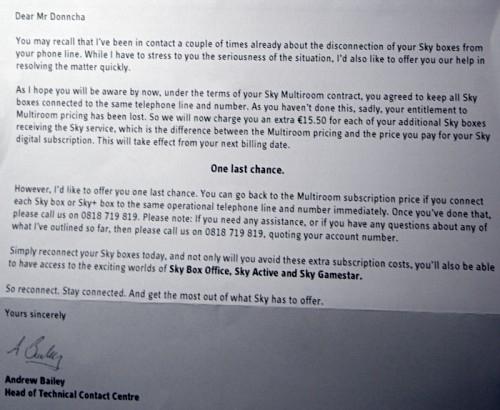 3 are offering 5 cent text, picture and video messaging right now but if their service is bad, what use are they, even if cheap? (via)