It’s not often that the Gardai are caught on Youtube, or so I thought …

Reclaim the streets – Gardai take a heavy handed approach to clearing the streets.

END_OF_DOCUMENT_TOKEN_TO_BE_REPLACED

What happens when someone rings two police stations at the same time on two phones and they hold the phones together? Claire has the answer. Must have been a meteorite hit the lines but they’re alright in Westport and Castlebarr.

Gammagoblin has made a Google Video of the phone call!

Frank thinks the Gardai were busy dealing with meteorites on the line when a certain memo came from Interpol. Oops.

So, what do you do if you drive a Northern Ireland reg car that the Southern Ireland Police can’t trace? Double park in front of some poor guy’s car and wait for the Gardai to come along and scratch their heads wondering what they’ll do.. 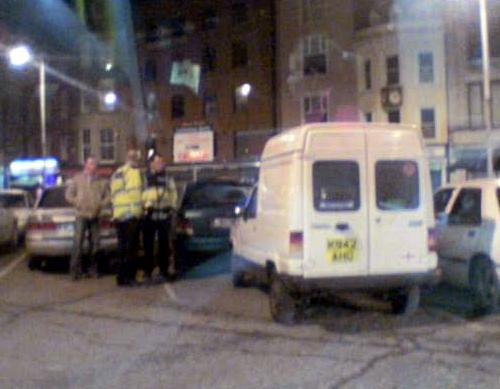 I took the above photo from the no. 10 bus, using my mobile phone so please excuse the quality of the shot!