I wondered why I saw someone visit my blog by searching for this subject. It appears that a tv drama will depict the assassination of US President George Bush! They use, “archive footage, actors and computer effects to portray the president being shot dead.”

Why? They want to explore the effects of the War on Terror on the US apparently. Do they presume that the US President will be shot in an act of revenge? It’s on More 4 on October 9th. I’ll watch it. (via)

While we’re on the subject of wacky ideas, I watched Being John Malkovich tonight. What a crazy film, but definitely worth seeing.

Who really controls the man the White House? Here’s a video interview with the controller himself. Excellent, and enlightening! (via)

Carole Coleman made headlines when she interviewed George Bush last year in the White House. Here was a reported who didn’t want to hear the same regurgated speel again and again.
In this extract, she tells why, I wanted to slap him, and recalls the aftermath of her intereview with “the leader of the free world” too.
(Side note.. nowhere is Carole COleman quoted as saying “I Wanted to slap him”, did the Times take creative license with the title of their lead story?)

Meanwhile, Andrew Sullivan takes Bush on over his nomination of Harriet Miers to, “be one of only nice justices on the Supreme Court of the United States.”

Via Yahoo News.. this perfectly composed photo of the US President: 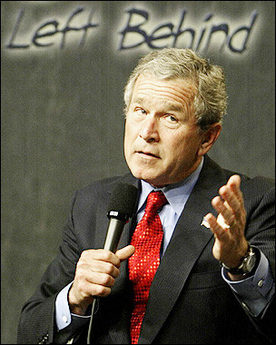 President Bush really has been caught on the hop again. A tale of two photos: Mississippi Goddamn shows what Bush was up to while people were being rescued from drowned cars.
Here’s a compilation of photos and commentary from New Orleans after Hurricane Katrina.

Satellite Photo of the area after the storm.

Why New Orleans is in Deep Water

Had a storm the size of Katrina just had the grace to hold off for a while, it’s quite likely no one would even remember what the Bush administration did two months ago. The national press corps has the attention span of a gnat, and trying to get anyone in Washington to remember longer than a year ago is like asking them what happened in Iznik, Turkey, in A.D. 325.

Just plain political bad luck that, in June, Bush took his little ax and chopped $71.2 million from the budget of the New Orleans Corps of Engineers, a 44 percent reduction.

This, friends, is why we need to pay attention to government policies, not political personalities, and to know whereon we vote. It is about our lives.

“In 2001, FEMA warned that a hurricane striking New Orleans was one of the three most likely disasters in the U.S. But the Bush administration cut New Orleans flood control funding by 44 percent to pay for the Iraq war.”
(via)

TomDispatch – Tomgram: The Immoral Relativists of the Bush Administration

Doonesbury – bound to raise a chuckle or two! (via)

The current episode of Star Wars is dynamite for the duplicitous Bush administration. Palpatine, a Sith Lord masquerading as a galactic Republican, becomes Chancellor of the Galactic Republic through deception. Palpatine uses wars that he instigates to elevate security over the power of the Senate and to become dictator.

THE ANTI-BUSH VIDEO GAME – Hulk Hogan, He-man, and a host of villians and heroes!