As cardinals gather to elect a new pope, a shocking photo was released showing President Bush snubbing the Irish candidate for the Papacy! 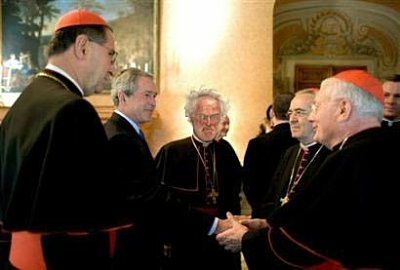 jwz posted the picture of Bush squeezing past Clinton at the new Presidential Library. Lots of comments follow!
Here’s the NY Times article on the event.

Or maybe just one word in this case. Go visit this CNN page and view the image of George and his wife.
See the filename?

Who else stayed up late watching the US election commentary and watched the non news unravel?
As time passes it looks more likely that Bush will win again and that has serious implications for the left, or perhaps for American society as a whole. Who likes Kerry anyway?
At least we can probably look forward to seeing ol’ Bill in the Whitehouse again. Cigar wielding interms beware.
What if Bush Wins?

On another matter, no doubt, the plight of Margaret Hassan has been largely forgotten now as well. I heard her sister speak and plead with her kidnappers, and it’s heart wrenching.
Later Kerry concedes defeat (5 minutes ago!). Well George, you’ve got a tough job ahead of you – a huge defecit, looming recession, and war in Iraq. Good Luck.

Kerry ended his quest, concluding one of the most expensive and bitterly contested races on record, with a call to the president shortly after 11 a.m. EST, according to two officials familiar with the conversation.

As of a few moments ago, these are the prices on both candidates in the US election from Paddypower.com:

And, as we approach the election hour, here’s Bush showing his true colours, giving Just a one-fingered victory salute to you and the world!

Over at A Whole Lotta Nothing Matthew Haughey gives a simple example to explain why aggression might not be the best policy.
I wish more Bush supporters could read this and grasp the idea that America isn’t any more special than other countries. Not likely however.

Justin has a lot more on RTE’s Bush Interview that I mentioned previously. He notes that the White House complained to “RTE, the Irish Embassy, the Irish Government, and the reporter herself” aftewards. hehe.
He includes links to the realvideo version of it as well as an mp3 audio-track too. I recorded the realvideo streaming version using the following command:

Heh. George Bush was pictured in his vest on Saturday morning! Has anyone got a copy of the photo that appeared in Ireland On Sunday?
I spoke too soon 🙂

From here – about the quality, it’s a “picture taken of a newspaper print from a video grab.”
Thanks Niall for the link!

I heard this discussed on the radio on the way to work this morning and promptly forgot about it. Must read it at home tonight!

The roots of the Abu Ghraib prison scandal lie not in the criminal inclinations of a few Army reservists but in a decision, approved last year by Secretary of Defense Donald Rumsfeld, to expand a highly secret operation, which had been focussed on the hunt for Al Qaeda, to the interrogation of prisoners in Iraq. Rumsfeld’s decision embittered the American intelligence community, damaged the effectiveness of élite combat units, and hurt America’s prospects in the war on terror.

Ah, here’s an interesting interview (22MB .mov) between Governer Bush and President Bush. My, how he changed his opinions!