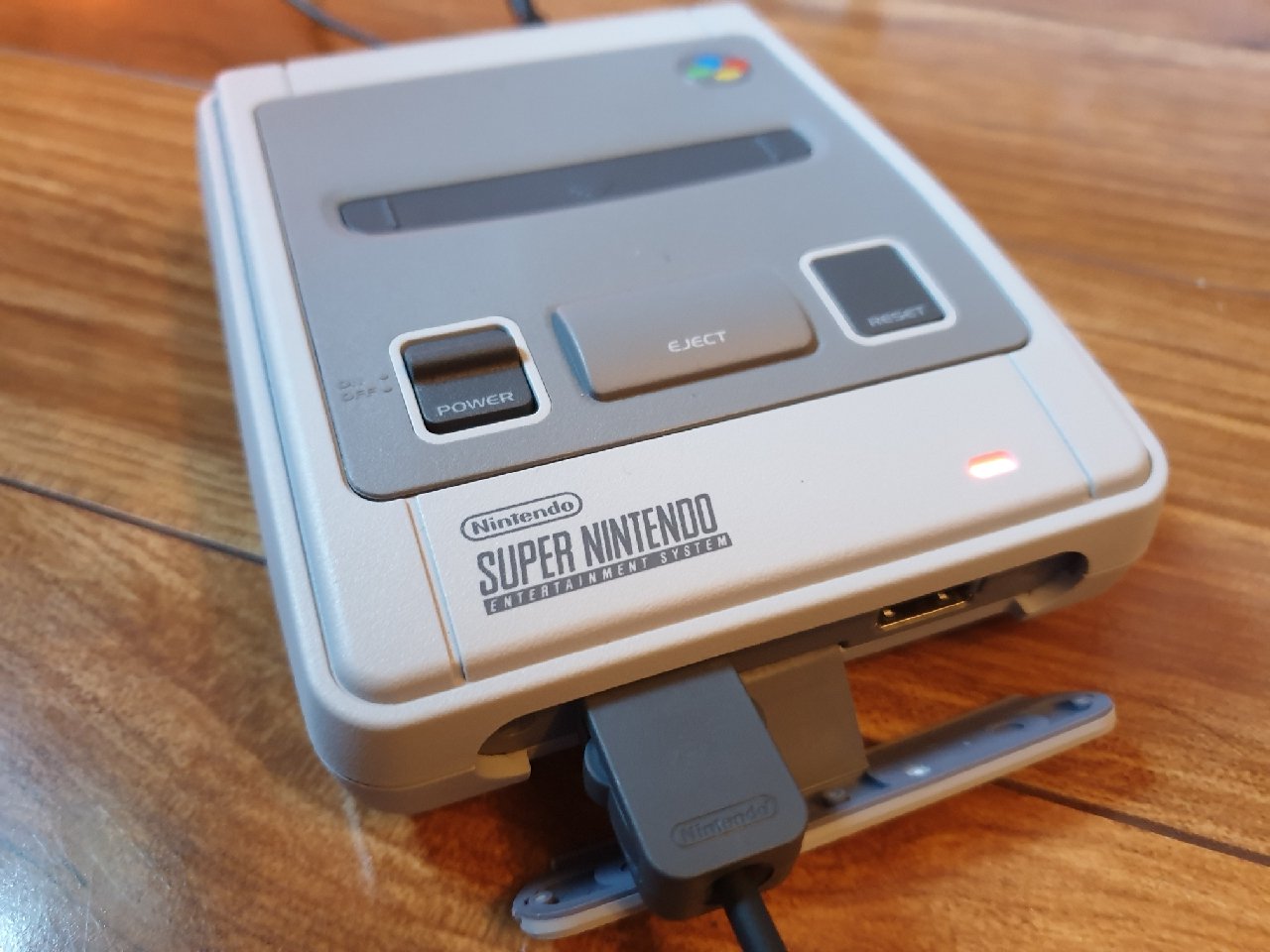 The first Nintendo console I owned was the Gameboy Advance. The earlier Nintendo machines passed me by as I was busy coding on the C64, messing with the Amiga and PCs and college then kept me busy!

I never owned a SNES and Nintendo 64 and rarely even used the real hardware. The only game in the SNES Mini collection that I’m nostalgic about is F-Zero as I loved playing that on the Gameboy and it plays perfectly on this diminutive machine.

This is a lovely piece of kit though. I like the menu system and the two controllers are wonderful. Now I know why people go on about these and seek out their modern equivalents in 8bitdo equipment.

Apart from games I’m looking forward to tinkering with the machine, and maybe adding a C64 core although the lack of a proper keyboard can cause problems..

I was going to make a joke about how a clone of The Great Giana Sisters had been released on the C64 a few weeks ago, but I would hazard a guess that only a handful of my readers will have the faintest idea what I’m talking about. Instead, you’ll probably remember that most gaming sites were abuzz with the news that Super Mario Bros had been released for the C64. That excitement then turned to fear and anger as Nintendo issued a takedown notice to one blogger who had a download link on their site. They have to protect their IP but the game is still available in several places including the Internet Archive and should be easy enough to find in the future.

If you’re at all interested in Super Mario Bros then grab your copy as quick as you can, just in case a massive database of copyright works is unleashed on the Internet blocking everything no matter how old it is.

The conversion of the game to the C64 is more than just a direct port. Both machines use the same (or similar?) CPU, a modified 6502 in the case of the NES and 6510 in the C64. The developer ZeroPaige spent 7 years modifying the raw assembler from the NES so it would work on the C64. He had to modify the graphics system to use C64 sprites and the sound system had to be reworked to use the SID chip of the C64.
The port also takes advantage of any extra hardware you might have plugged into the C64, or even uses the extra power of a Commodore 128 if you’re using that. Here are two videos showing the game off on a C128 and also on a Turbo Chameleon V2, an FPGA based C64 machine. The game suffers slowdowns on an original C64 so it’s best played when the machine has some help, or in an emulator. I have a C64 DTV. I wonder how hard it would be to get it running on that?

It seems Nintendo aren’t really interested in the C64. Many years ago Gary Lidon and Gary Penn created an SMB demo for Firebird who sent a video of it to Nintendo. They responded with a cease and desist order!

Rainbow Arts apparently did the same and were rebuffed but they reused their code and cheekily created The Great Giana Sisters. Nintendo promptly came after them at the time and the game was taken off the shelves within weeks. Pirated copies are simple to find but the original must be very rare. A version of the game with the main character changed to Mario did find it’s way online but it’s basically Giana Sisters. No bad thing since The Great Giana Sisters is a great game. It’s one of my favourite C64 games.

After that detour down Nintendo lane, let’s get back to reality. If you want your very own physical copy of The Great Giana Sisters then check out this Ebay auction. Priced at an eye watering £199.99+postage I don’t think it’ll be an impulse buy but some collector is sure to snap it up.

As a historical note, there are two conversions (Atari and Ocean) of the original Mario Bros for the C64 if you really want to play it. I haven’t played either of them. I didn’t even know they existed until a couple of years ago!

I bet Niantic wished they’d created a Pokemon game four years ago instead of labouring on Ingress all that time. Pokemon Go was released last week in the US and has already spawned many a meme on Facebook. It apparently has more concurrent players than concurrent Twitter users. 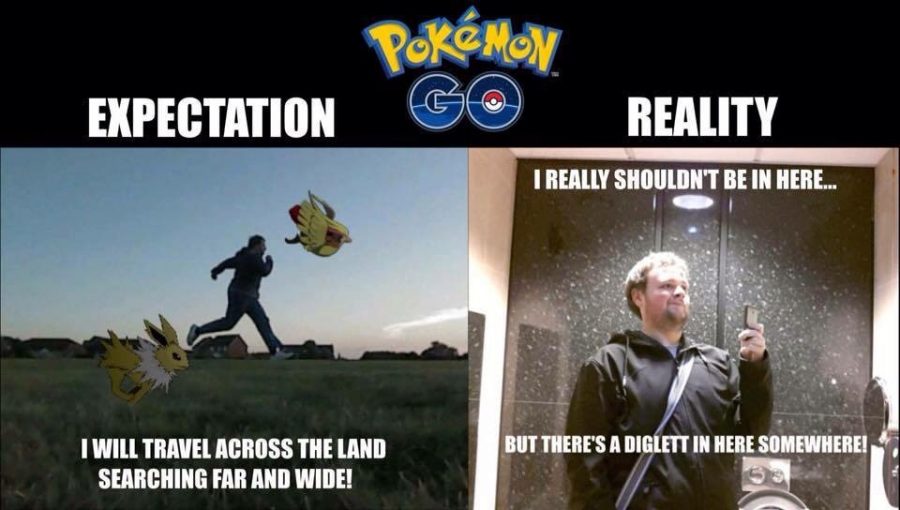 My first, in the wild exposure to it was today when I saw some teenagers talking about it over lunch at a cafe.

Then some twenty-somethings arrived looking at their phone screens and shouting something about the game. In a daze they walked around with heads bent.

A short time later we walked past a group of kids, still in school uniform but with eyes firmly glued to phones.

Anyway, it was months after I started playing Ingress that I saw another person playing the game. Pokemon Go is already much bigger. Hopefully they’ll be able to keep the game interesting. My sone was never interested in Ingress, but he’s already asking about the new game. I don’t know which game will be better once Pokemon Go receives a few updates. It took ages for Ingress to be fleshed out so I expect much more from them.

I haven’t tried it because my phone is broken. Boo. I had the device on a table, swiped up the screen and the display suddenly went almost all flashy green. I rebooted but now the screen won’t respond to any key presses. It better be covered by warranty as I only bought it a few months ago! 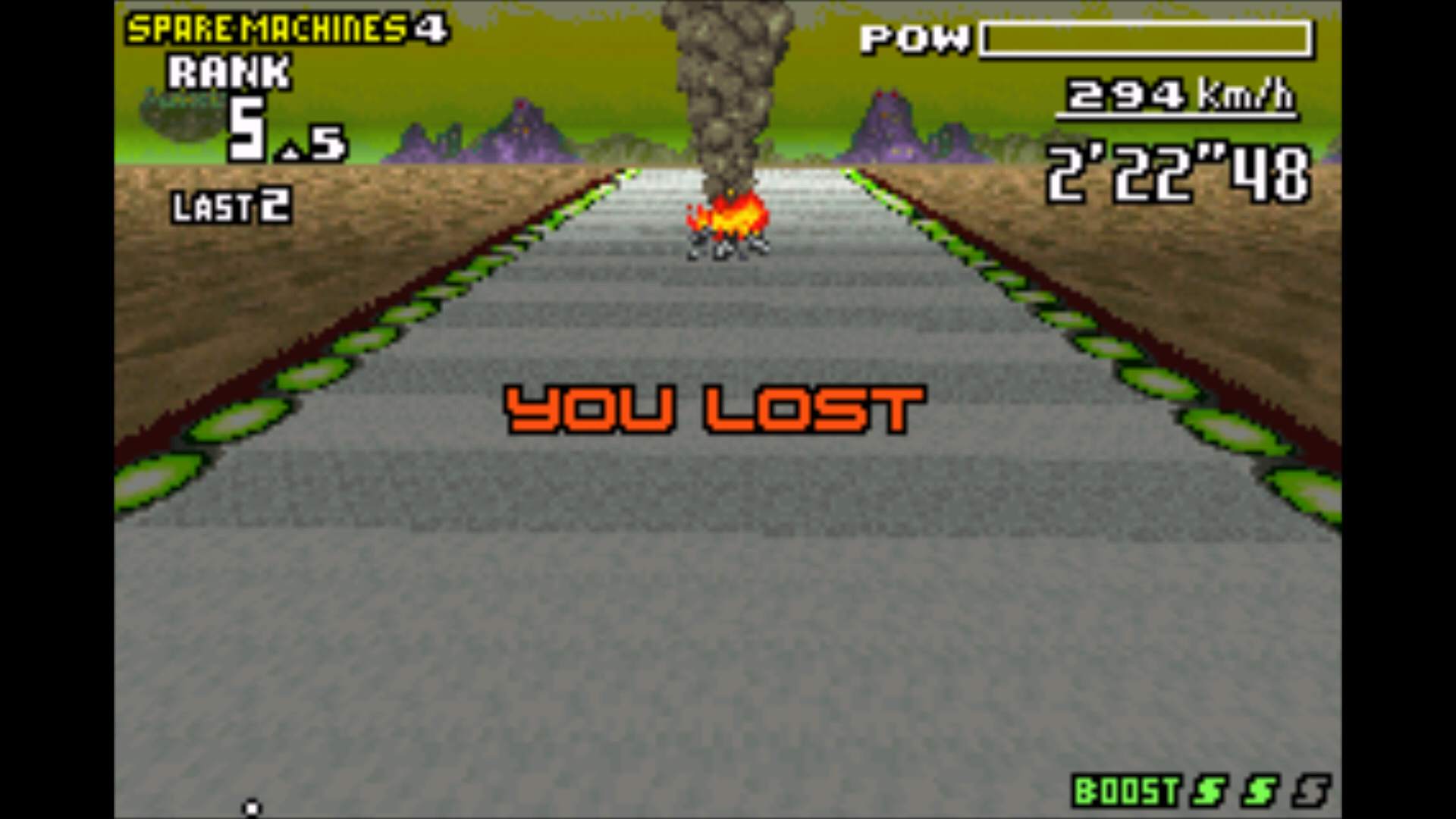 I played F Zero to death on the original Gameboy Advance, and even with the awful dark screen it was a great game.

Playing it on my Galaxy S5 in an emulator with a controller is even better as I don’t have to lean the screen into the light to see the action!

I need more practice, I still suck at the game!

I was looking on Amazon over the weekend for PC steering wheels when I remembered that my phone could do the job! Install JD SimWheel from the Play Store, grab the device driver and server from here for your PC and you’re 90% of the way there.

It might take a few minutes tinkering with the settings in-game but Euro Truck Simulator 2 works fine with it. I still can’t reverse properly but now I can take corners smoothly and two of the buttons on-screen are already configured for left and right indicators!

Here’s a howto video and demonstration using the game GRID created by user MyHD2AndOthers on Youtube.

If ye olde Mario was made today… (via and many others)

“This lvl has been moderated!!i dont know why,i needed to change the logo and name.”

Little Big Planet allows you free rein with your imagination but sometimes creators take inspiration from existing games. Such was the case with this Mario influenced racer. It’s a fun little level, looks beautiful and it’s simple. Just keep R1 down to drive. I’m the sackboy with the cape, my son Adam was the brown fella.

Ironically, I received an email from Youtube stating the following,

Your video, I wonder why it was moderated …., may have content that is owned or licensed by Sony Music Entertainment.

No action is required on your part; however, if you are interested in learning how this affects your video, please visit the Content ID Matches section of your account for more information.

I wonder if everyone who uploads Little Big Planet gameplay videos receives such an email? Duck said he got 4 of them!

Wii owners rejoice! News just in that a new title, “Babysitting Mama” will be released this holiday season.

The game promises to bring all the joys and challenges of taking care of a newborn baby to your Nintendo Wii. Wouldn’t that be wonderful? For the most realistic experience of course you have to leave your Wii and TV on all night so it can wake you up from your slumber at 1am, 3am and 5am for feeding. I doubt they’ll have that.

Does this sound fun to anyone? I’m a work-at-home dad; during the day I’m writing and editing stories while parenting our ten-month-old son. On a good day I get to use the bathroom when I need to. On a bad day my eyes glaze over with a thousand-yard stare. I love my kids, but having a baby is a job with no days off, no pause button, and no cheat codes. Turning that experience into a game where the child will never grow up, go to college, and allow you to have a single dinner out with your wife sounds like… fun?

Fire up Little Big Planet and search for Mario. One of the levels is the most amazing homage to the moustached plumber ever. But ssshh, don’t tell Nintendo!

Nintendo 3DS, a 3D version of the Nintendo DS will be released sometime in the next year. Cool.

Nintendo Co., Ltd.(Minami-ward of Kyoto-city, President Satoru Iwata) will launch “Nintendo 3DS”(temp) during the fiscal year ending March 2011, on which games can be enjoyed with 3D effects without the need for any special glasses.

Now all they need to do is solve the awful piracy problems on the DS and publishers might actually support the platform. (via Engadget and @conoro)

A super secret mockup of the Nintendo 3DS has just been revealed! (via gamovr and Retroremakes)