Somehow a cat got stuck in the cavity blocks of a wall in Blarney today. My wife was alerted to it by a post on the Muskerry News Facebook page. She was very upset and decided immediately to go up there and see what she could do.

I know the area well as I bring my dog for a walk there most days. I thought I could get the cat out by breaking the block around it so I grabbed a hammer and screwdriver, and for height a plastic chair from the garden.

The cat was so calm and friendly. She didn’t once give out, or try to claw me. She was obviously in distress because she had only her head and a single paw out.

After 20 minutes of carefully digging around her she pulled back into the wall so I was able to break it apart more quickly She came back too soon and poked her head out again, and wouldn’t duck her head back down to make my job easier!

My wife had a brain wave then to get the tin of cat food she had left in the car. We allowed the cat to smell it and made sure she saw us drop a few bits into the block in front of her. A moment later she ducked down to eat and I was able to dig away at a faster pace.

Once again she came up for air, but she backed down again and eventually the hole was big enough and out she popped with a little help! 🙂

I took her off the wall and put the tools away in the car to shouts that, “the cat has jumped up on the wall and is trying to get in again!” Luckily there were humans around to discourage this adventurous side of her personality. I grabbed a few rocks and covered the hole.

I recognised the cat once she was out. She tried to make friends with my dog a few times when we were out walking. Lovely cat, hopefully she’ll keep out of trouble now!

Three days later I went for a walk this morning and the cat is still safe and sound. 🙂

If you’ve had enough of SOPA, PIPA, ACTA, bailouts, the Euro defaulting, rising oil prices and the rest of the bad news you’ll enjoy this video.

By chance we have a Shitzu at home and a black and white cat (daughter of this cute little fella). They’re friendly but not like these two!

I expect this video will be pulled from Youtube just as soon as the copyright holder matches the song.. Oh well. 🙁

A tiny little kitten wandered into the dog’s kennel this morning and started to meow her heart out. She’s so small I can fit her in one hand. She tried to befriend and approach a local tomcat but he didn’t want anything to do with her. Thankfully Adam kept his distance from the new “baby” and I was able to feed her heavily diluted milk in a syringe.

Not sure what’s going to happen next.

Cats play rough, they like to be bad, they like to be slapped around a bit and they lap up the punishment! Watch this video and be convinced at the deviant ways of our feline pets. It’s disgraceful!

Of course I’m joking. I love cats and this video is so funny it made me laugh out loud. That cat really seems to be enjoying itself being slapped. A sadistic and masochistic cat perhaps? (via)

PS. the world would be a much quieter one without Youtube. Shudder.

This music video for the Fat Boy Slim cover of “The Joker” is brilliant! Featuring kittens, kittens and more kittens! So, so cute! (via Cute Overload!)

No, sorry, I just made that up. From reading this article on catnip, I wouldn’t be surprised if cats did dance after coming into contact with catnip!
Looks like it could be good as an insect repellent too, just watch out for the local cats.

This very, very cute kitten is looking for a home. He was born without eyes but in the right home…
Thanks Sharon for finding this!

I saw this short film at www.the-eviltwin.co.uk on “The Panel” on Network 2 the other night. Unfortunately, the site is an awful flash site. To watch the “Evil Twin” movie, click on “View Highlights”, and then click on “Clip one”. It’s a tiny box, and I can’t see any download link for a sane version.
Update! That site is gone, but you can get the Ford Sport Ka ads here: http://www.allowe.com/Humor/video.htm – just scroll down a little. Thanks Brian for getting that!
Here’s a lot more info about the advert. Good read. 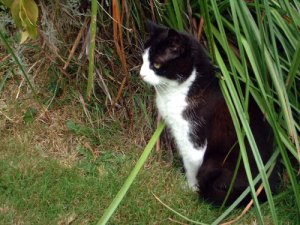 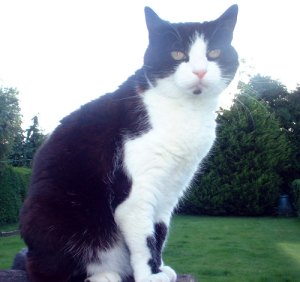 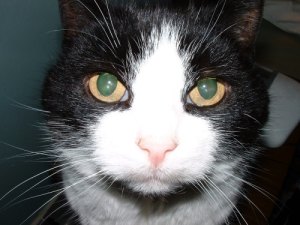