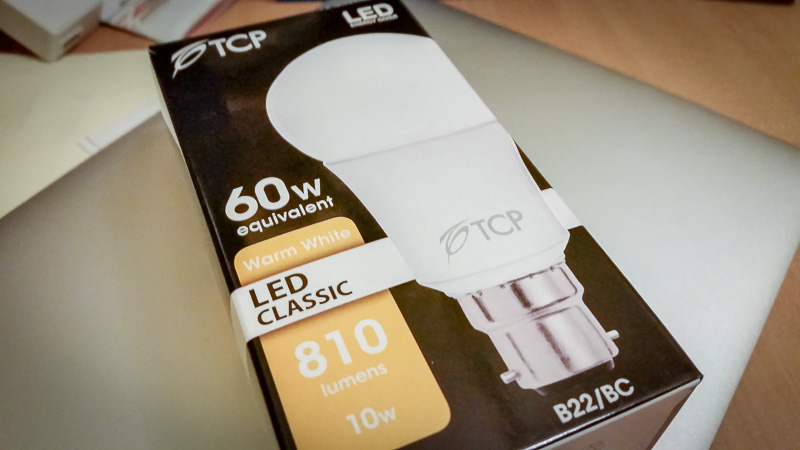 OK, this is an odd subject for my blog. A lightbulb. The TCP B22/BC 10 Watt LED bulb is the first LED bulb I’ve bought and there’s not much to say about it except that it’s wonderfully bright and only uses 10 watts of energy but is the equivalent of (or brighter than) an old 60w bulb. I replaced several bulbs in my home with them and I’m really impressed with how bright they are. As they’re LED bulbs there’s no warm up, they’re instantly bright as soon as you switch them on.

All the CFL bulbs that were replaced like this Solus model used more energy, from 15w for that Solus one to 20w for a cheap Tesco model. The TCP bulb is rated for 25,000 hours too, much more than the Solus one (10,000) and a gigantic step up from the Tesco one of only 3,000 hours.

The bulb isn’t cheap. You can buy them for €9.99 in Woodies, and they’re even more expensive on Amazon UK. A quick Google search shows Homebase have them cheap however.

In the course of researching this post I also found out that the bayonet mount so familiar to everyone in Ireland and the UK isn’t used everywhere.

The bayonet mount is the standard light bulb fitting in the United Kingdom and in many countries which were members of the British Empire including Australia, India, Sri Lanka, Ireland, and New Zealand, parts of the Middle East and Africa and, historically, France and Greece.

The real advantage of LED bulbs is their longevity which is difficult to review, but I’ll update this post or leave a comment here when I have to replace any of them. Leave a comment and subscribe to the comment notifications if you’re curious how long they last.

I have no illusions that this might make me a better player but it might make it easier to be a bad player. 🙂

Joystiq reviewed the X Scorch 360 I mentioned previously. It’s a mouse and nunchuck device you can use with the Xbox 360 (or PC) that takes the place of the Xbox controller. I would dearly love if consoles support mice and keyboards as gaming devices so I had high hopes for this.

They weren’t too happy with it unfortunately.

The frustrating thing about the X Scorch from Bannco is how close the odd split-controller and mouse combo comes to being really great. As you’ll see in the video, though, the controller, compatible with Xbox 360 and PC, is all but impossible to recommend at $79.99.

Read the comments on the review however, lots of the settings are configurable on a PC so perhaps they’ll do a follow up review.

My quest for a component switcher cable continues. Play-asia were totally unresponsive and then so were Divineo.co.uk so I’ve ordered the iMP 4 in 1 Multi Component AV Cable Xbox360/Wii/PS2/PS3 from an Amazon.co.uk reseller. It’s almost half the price again of the XCM cable I had ordered from Divineo.

Needless to say I have cancelled my Divineo order.

All I want to do is play my PS3 in HD, is that so bad? *sob* (sound of violins, fade to black, roll credits)

I thought I had got off lucky with my Macbook. I had dodged the problems with sudden shutdowns that others experienced and I was happy with it. Unfortunately, for the last two days the screen on the laptop has flickered for about 30 seconds after coming out of sleep mode. It looks like someone is adjusting the brightness up and down a few notches really quickly. Here’s what it looks like:

Is there a fix for this? Not yet. There’s speculation that a firmware upgrade might fix it but I have my doubts. My laptop is still under warranty but I presume it has to be sent to Dublin for repair. I better read the warranty card.

I’m not the only one affected by this. Check out these other blogs and discussions:

In other news, I’m looking for a quiet PC to replace my noisy desktop machine. It’s possible to tell from anywhere in the house when the machine is off. It’s that noisy! My brother has a nice quiet Dell desktop, but I think he got lucky. I’m very seriously thinking of buying another laptop and hooking a proper keyboard, mouse and my LCD monitor to it. I can cope with having a relatively small harddrive in it. All my backups are now done to an external 500GB disk anyway. Ah yes, the old “freeze the drive” trick.. never tried that, but it’s one of the suggestions in this Slashdot discussion. May try to shake my dead disk later. *shrug*

Some of you may remember my bad luck with hard disks during the summer. One was a Fujitsu drive that died hours after I plugged it in when I got home. I lost a month’s worth of photographs from Chicago and that was obviously upsetting. Of course, after the rest of what’s happened it’s small change in terms of the bad year that 2003 was for me!
Anyway, it’s 2004 and there’s a possible solution to the drive problem!
Here at work another Fujitsu HD died yesterday morning but this time I had more success recovering data from it. I asked on #linux, the ILUG IRC channel, and Christian suggested Parted, while Liam suggested using Gpart. Gpart is on the ILUG BBC and a quick search found this description of how to use it!
I can happily say that gpart worked perfectly! It detected the partition table and I was able to write it to the drive again. A quick reboot and I was able to copy off the important data! Other stuff can wait but gpart turned out to be a life saver here. 🙂
Of course, this is only usefui if your BIOS and Linux/*BSD can see your HD.
I have my fingers crossed that I can do the same on the HD at home. There’s a lot of photos I want to recover!