John Pozadzides has released the first video from WordCamp and it’s sure to be one that will interest many. John C Dvorak debates with Om Malik on the subject of Blogging vs Journalism. It’s hosted on blip.tv and John has uploaded a high quality version there.

I won’t embed it here, go look at John’s post for the video! Thanks John for doing such a great job!

We spent a good portion of today at SFMOMA, where they have a really interesting photography exhibit, and some of the modern art on the first floor really caught my eye, especially the self portrait of Andy Warhol and the image containing the pencils across the room from it. Blew my mind they did.
Later we went for dinner but in between we relaxed in a local park. Here’s a photo Alex took of me and Matt. Alex has a neat little RF transmitter and receiver for his camera and flash. He lay the flash on the bench next to him while he shot this photo. Good fill flash and it’s not in-your-face like an onboard flash would be. I have to get my hands on an RF transmitter to go with my 580EX! 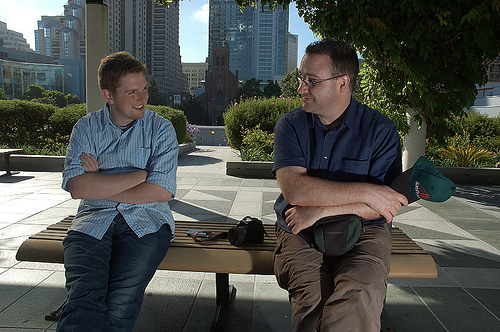 While on the subject, this is Automattic. There are quite a few of us now, and as you can see, we’re really getting into the formal “must wear a suit to work” dress code. 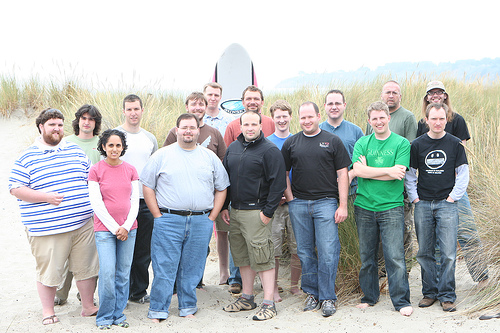 7 replies on “Dvorak vs Malik at WordCamp on video”

Donncha, I have really enjoyed all of your photos of the Automattic team after wordcamp. Just in case you are still in the states traveling, you are welcome to cruise by San Diego and say hello!

If you have a second, I would like you to read something on my blog. If you click on my name above this comment it will take you the entry. I would love to hear what you think.

Again, such an absolute pleasure meeting you. Although brief, you left a strong impression.

Hey, if you find that RF transmitter for your flash let me know! It sounds pretty useful and I think mine will take a remote as well so I’d be interested in getting one.

Of course, after seeing the range of your flash at WordCamp I just might have to upgrade mine sometime soon as well. 😉

I’d love to see more videos like this… anyone know if there are any other vids from Wordcamp? I searched youtube and only found 1 other 🙁

I feel sorry for Maya standing there as the only female. At least we know who see is. Don’t have an idea on most of the rest.

I’m still working on digitizing all of the other videos, but I’ve now got almost all of them transferred from tapes to my hard drive.

At this point I just need to do some video editing and transcoding to begin posting them, but there will be a total of around 15 videos.

I’m out of town again until Friday, but you can expect to see at least one or two new videos this coming weekend. Feel free to keep an eye on my blog if you want the quickest updates, or I’m sure Donncha will post them here when they are ready.