Take this with a grain (or essence) of salt because it’s the Internet but some of these stories were too good to disappear..

I have worked at a homeopathic manufacturing plant. Yes, there is always a starting material, however sometimes it can get really shady. Homeopathics are regulated by the FDA under CFR 211, so if you make stuff up (like lie about having a starting material), and they find out about it, you’re in big trouble.
For most herbals, the actual herb is purchased, then tested to make sure it’s the right variety. This can mean TLC (thin layer chromatography), which is what I was responsible for doing when I worked there. A lot of times we got in a different species of the herb, but used it anyway.
Sometimes a pathogenic starting material is used – in that case, we contacted out to a third party micro lab that keep strains in a controlled environment. We paid the micro guy a contract fee to do the dilutions himself which ended up being about $3500 because only he was licensed to deal with pathogens. We made 200 30 mL units out of that which sold for less than $1200 total. Such a waste.
Sometimes a material of animal origin is used. If it’s something weird, like bovine trachea, there really isn’t a good method to test it, so we kind of took the supplier’s word for it. Pretty shady.
One time we needed to do an extraction of “morning dew”, so we went outside in the morning, shook some water off of some weeds, weighed it, then did the dilution.
My favorite story is this one: We needed to do a dilution of uranium 200X. Problem, is you can’t get uranium (unless you’re Doc Brown), so we went to Hanford (this was a looong time ago) carrying a vial of water. When we got there and did a tour (the plant manager knew what we were going to do), we took the vial and held it up against a glass wall that was a close as we could get to the cooling chamber. That became our “1X” dilution. We went back to our lab and diluted it to 200X, in ethanol. We had a lot left over, and because it’s illegal in WA to dump large quantities of ethanol down the drain, we needed a disposal service. Unfortunately, when we tried to explain that it was a 200X dilution (and that there wasn’t even a single atom of uranium in there to begin with), they still wouldn’t take it, because it said “uranium” on the label. So we took a shovel and buried in the back of the plant, and never told anyone.

One time we needed to do a dilution of goldenseal. My lab partner dropped his pen in the mix. We didn’t want anyone to find out, so he reached in to grab it, covering his arm in goldenseal, a potent laxative. He spent the next several days with severe nausea.
One time a guy wanted us to make this product called singtu. It was a pretty standard herbal homeopathic, except at the end we were supposed to “sing to” the final product, using these chants that the customer prepared for us. At first we were like “no”, but money is money, so when he visited we sang the chants. After he left it became a joke to say the most vulgar things we could around it.
One time we needed to make a belladonna 1000X dilution. I had to sit there and make sure the compounder did it right. That was the most goddamn boring thing I have ever done. It took two solid days

Meanwhile, Heel, a company that made homeopathic “medicine” has left the US and Canadian markets after settling a class action lawsuit. They would have had to modify their packaging and advertising to be more truthful. Unfortunately they still operate in South America and Europe. 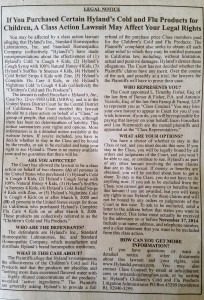 And finally, I saw in the money section of “USA TODAY” a few weeks ago while on the way home from Automattic’s Grand Meetup that another company, Hyland, that makes homeopathic “medicine” is facing a class action lawsuit over their children’s cold and flu products. The first product, Hyland’s 4 Kids Cold ’n Cough has heavily diluted ingredients. While there might be some particles of the X6 ingredients left, there won’t be any of the X12 ingredients.

On Friday I felt Adam’s first teeth as he bit down on my small finger but they were still under the skin. This morning as he laughed in my arms I saw the tops of two tiny front teeth poking out of his bottom gum! And yes, baby teeth are sharp!

So, from what I can gleam online, we can expect the next teeth to appear in a few weeks time. Teething hurts though. To calm him down, we used the ever useful Calpol as well as two homeopathic products: Nelsons Teetha and Gumeze.

Despite the reservations I might have about homeopathic remedies I can recommend Teetha granules. A screaming crying baby transforms into a happy smiling baby within seconds. The packaging declares that, “each 300mg sachet contains 6c homeopathic potency of Chamomilla”. It also contains Xylitol, lactose and starch. 24 sachets cost €7.25. I’m not sure how that compares to the price of Bonjela and other products.

Gumeze is a liquid gel with a long list of homeopathic ingredients, including Chamomilla. It works, but I feel that Teetha works better.

The end of homeopathy? – a very lengthy and critical article looking at the alternative medicine of homeopathy. 456 comments and counting. (via Mink Toast.)
After the birth of our son Adam, my wife was told to take Arnica C30 by nurses and doctors. After reading the post above, I searched for Arnica C30. The first result is a double blind test of homoeopathic arnica C30. The summary results aren’t encouraging,

73 patients completed the study, of whom 35 received placebo and 38 received arnica C30. The placebo group had a greater median age and the arnica group had slightly longer operations; nevertheless, no significant difference between the two groups could be demonstrated. We conclude that arnica in homoeopathic potency had no effect on postoperative recovery in the context of our study.

On to the links …