One of my pet peeves about logging into sites on my phone is the password field. On a large screen it makes sense that the field is obscured by * characters but what about on a small device only you can see?

I can’t be the only one bothered by this because the wifi login form on Android devices has a handy “Show password” setting. Maybe it’s because people use the default wifi password set by their ISPs so much it’s their only “strong” password. Anyway, I wished there was a similar setting for other login forms.

Well, now there is, sort of. A handy Xposed Framework module called HideNoPasswords that reveals the letters behind the dots. I found I could even swype my password which makes logging in with phrases so much easier. 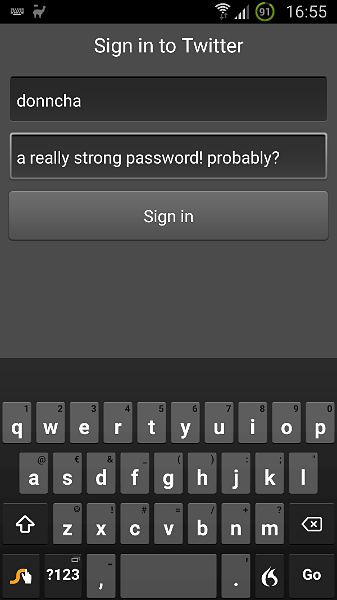 There are downsides. Security is the most obvious one. An application could take screenshots in the background when it detects the keyboard is in use and send that data somewhere. Someone could look over your shoulder and see the password.
Also, your phone has to be rooted, and you need the Xposed Framework installed but if you’ve conquered those hurdles installing this module is simple.

Here’s the XDA Thread on the module, and the XDA blog post where I found out about this handy extension.

4 replies on “Unhide passwords on your Android Device”

I do find the ***** extremely annoying, especially on phones as the buttons are so small and it is so very easy to input an incorrect keystroke.

Unfortunately once you start mentioning rooting and other such nonsense, you know me I won’t tinker with that stuff as I know I’ll break it and end up having no phone at all so I’ll have to persevere with hoping I ‘get it right’

Handy app though by the looks of it.

Thank you for providing this information. I changed my Exchange password in a sleepy haze and did not commit any changes to my password manager so my email worked on my phone but when I got to work the next day I couldn’t remember the password for the life of me — I have an HTC phone and apparently the password is encrypted in the SQLite database that stores my email settings!

I just retrieved my Exchange password this way: Switch on TalkBack (the screen reading function under Accessibility). Ensure you turn on ‘Speak passwords’. Then switch back to the email settings and click into the password box.

This would be helpful for people who need to reveal passwords. But what about emails??? I mean, my friend is locked out of Twitter and it says to reset their password which they wish to do, but it needs permission from my email, which they no longer memorize and is covered by ***.