Life here in Colorado at 9,600ft is much the same as at sea level except for one major difference. The air is noticeably thinner at this altitude and takes some getting used to.

Thankfully we’re not here to train for the Olympics or do anything strenuous like that. Lying in bed is difficult enough! I tried reading last night and became breathless just because I was looking down at my book. Rolling on my side helped, but it’s scary when you can’t catch your breath. It feels like someone holding a bag over my head.

There’s an oxygen bar in a local town, and cans of oxygen can be purchased at the local store. Hopefully no more frights.

No previews of what we’re working on right now, but you’ll see the fruits of our labour soon enough! 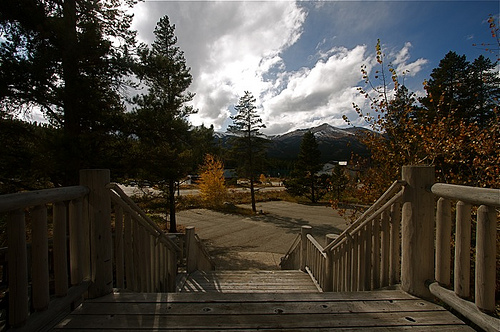 For photos see the Automattic Group on Flickr and/or my Colorado Set.

7 replies on “Hold your breath”

Gonna climb any 14ers while you’re out there?

Its a beautiful place my wife an I wanted to visit for our first ski holiday with our daughter also first family holiday, but were advised not to go due to the quality of air. I think Colerado has been recently voted as the worst city in the US for Asthma sufferers, so kind of glad I didn’t go as it wouldn’t have been much of a holiday for me (asthma sufferer).

Mark – haha, good one. Not a chance. The altitude is making even sleeping uncomfortable so I’m going to avoid doing anything beyond light walking this week!

Khaled – looks like that’s not true according to this post. “And the best is Colorado Springs, CO.”
But I don’t think being up so high would help anyone with respiratory problems.

I think what Khaled might be referring to is Denver’s infamous “brown cloud”; it’s the result of a meteorological event called a thermal inversion, where the underlying air is trapped at ground level due to differences in air temperature at ground level versus higher up in the air. Pollution gets trapped at ground level and just hangs around, waiting for a stiff wind or a shift in pressure systems. Denver has made significant changes in its air quality and brown cloud occurrences are far fewer than they ever used to be.

Donncha, altitude sickness and dehydration are very real and very dangerous at altitude – respiratory issues are common. Ideally, folks new to high altitude living should spend 1 – 3 days below 8000ft. acclimatizing before going into the mountains, but that’s not always attainable. Remember to keep your activity light, rest often, and drink lots of water.

Transplant – thanks for the info. I’ve been taking it easy since I came here and drinking lots of liquids but it’s tough!

hey donncha, beautiful photo. I spent some time around red feather lakes a while back. the sky is so beautiful there. Right now I’m living in cusco, peru, where the elevation is 10,900 ft. but you get used to it after a while. and there are no oxygen bars here. 🙂

And I thought the air was thin where I live at 4,000 feet! 🙂 Great photo there Donncha, looks very nice. I’d love to visit Colorado some day.