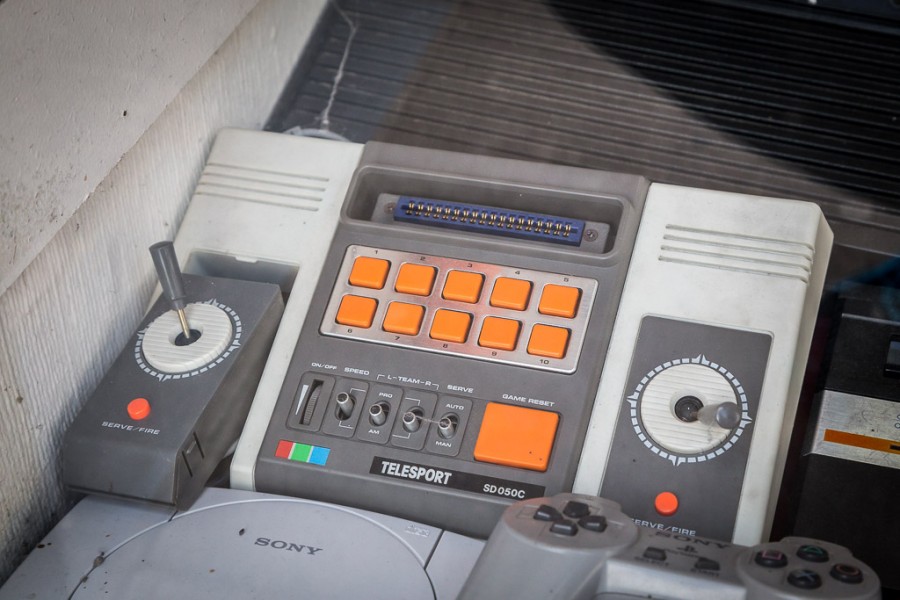 Many years ago I mentioned the first computer system that came into my family home. I couldn’t remember what it was called and it had been thrown out years before. I had searched retro console sites, looking through “history of computing” Youtube videos, and more but I couldn’t find it anywhere.

That was until Saturday afternoon while out on a photowalk in Cork City! In the window of the retro gaming shop on North Main Street was a sight I had last seen more than thirty years previously. I couldn’t believe it!

Now that I have a name, the Telesport SD 050C I could look it up and I found out that it was one of a number of Pong clone machines released in the late 1970’s. The 050C family aren’t very rare and aren’t worth much but it was a strange nostalgic feeling looking at it there after all this time.

It’s a Pong clone. The screenshots above are basic but in the early 80s it was a lot of fun. I don’t remember the model we had having that many colours. Must have been an earlier model I guess. Here’s a brief history lesson:

The world was undergoing “PONG Madness”. It seemed only natural that developers would create advancements to the original AY-3-8500 chip to incorporate color and even more games. This explains the amount of PONG systems since each machine contained a different chip. However things were handled different in some areas particularly in Europe.

Europe did not see the release of the Intellivision and Atari 2600 till the early 1980s. This allowed Pong to have a longer success. Rather then creating a new machine for each new chip, developers took the General Instruments popular line of chips and slapped them into cartridges. These carts were not like ROM carts used in later systems. They simply housed a specific General Instruments processor chip with pin outs to interface with a console. These were the PC-50X line of cartridges (see the Games section for specifics).

With the PC-50X cartridges available, console manufacturers were able to produce a machine that could play several games and market them at a low cost. The units were made in various countries and were marketed by Creatronic, Hanimex, ITMC, Rollet, GrandStand, Soundic and lord knows how many other manufacturers. There are literally over two hundred console variations that utilized this technology.

The initial model SD-050 varied in terms of outward appearance (colors, etc), manufacturers names and slight modifications. However each unit had the same overall design with two detachable controllers with 10 buttons located on the top of the machine. These 10 buttons, which clearly identify a PC-50X based console, were used to select the different games available on each cart. The SD-050 model only produced black and white video.

New models such as the SD-070 and SD-090 appeared and sold well into the 80s since the units were far cheaper then the newer consoles making waves in the US and Japan. These newer models played the same carts, but added additional settings, sound and SECAM color (4 colors).

There were far too many PC-50X cart accepting consoles and it is difficult to list them all.

More links to read up on the PC-50X cartridge and related machines:

I found one video on Youtube featuring this machine!

I resisted the urge to buy that machine last weekend. I may have a CRT TV in the attic but the games are so simplistic it’s best to leave them in the past where they belong. The machine architecture isn’t emulated but the games could be remade easily by anyone interested. Hmm, maybe..

Retro gaming has made a comeback! A temporary looking shop on North Main Street in Cork is selling old retro consoles at possibly “Irish” prices. According to the “Bargain Hunt” section in Retro Gamer, a Sega Dreamcast can be purchased on Ebay for about £25 Sterling. They’re going for 59.99 Euro here. Cheap enough for an impulse buy? What do you think Mark?

What’s on offer? I saw the Dreamcast of course, many Gameboys in the window, NES, SNES, Sega Mega Drive (Mega CD), Sega Master System, Nintendo Gamecube (why bother when you have a Wii?), Original Playstation, Master System II with Sonic the Hedgehog cart still stuck in it, Xbox 360 external HD DVD player (40 Euro? Can you buy those discs?) and lots of games. I think there were original Xboxes too. There were loads of games for the system anyway.

I doubt the shop will be open after Christmas, none of the consoles or games look brand new so it might be best to test out any purchases when you get home before wrapping them up for Christmas. Bring a copy of Retro Gamer with you if you go in to check the price on Ebay. I have a feeling the guys running the shop will be more than happy to haggle!

Thanks Richard for the heads up. Worth going in there just for the look. I think Branedy may be interested in it too. (I never owned any of the consoles above so I didn’t get a burst of nostalgia for them!)