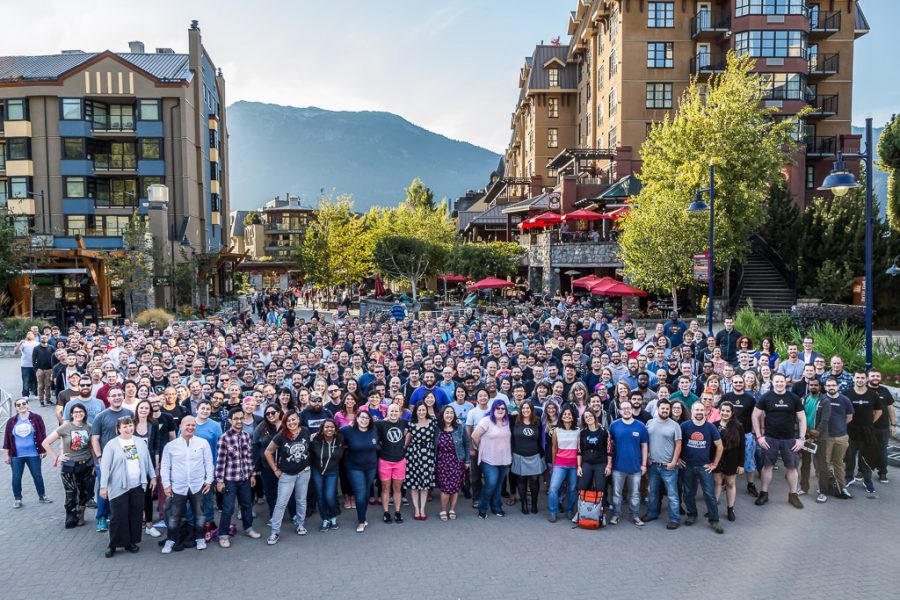 This is (most of) Automattic. We’re in the town of Whistler, Canada for the annual Grand Meetup. The company is growing every year, from tiny origins when a small group of us hacked away on a couple of servers to almost 500 now!

In the old days the company portrait was easy. The first one was us seated around a large table. I remember well the one in Breckinridge, Colorado. The whole company fit on the stairs leading up to one of the houses we had rented.

In recent years it’s been a challenge. This year Rose Goldman Simon and I scouted the town of Whistler for suitable locations. Rose had already been around and picked out several so I helped to narrow it down. We’d need:

We narrowed it down to two locations. One in front of a local store where there’s a nice courtyard and this location above. This won out despite the fact that sunlight would be shining on the camera lens but a large whiteboard helped keep the sun off. Ironically as people dispersed after the shoot, the shadows crept up past where the camera was which would have simplified things!

Final development of the photo was in Lightroom and Affinity Photo.

You’ll also find the photo on Matt’s blog, and shared by many of my colleagues elsewhere. I’ve also uploaded the full resolution image on Cloudup.com for your viewing pleasure.