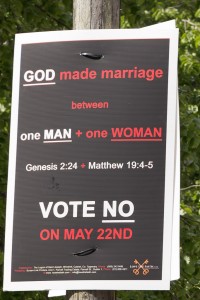 I knew I recognised the name on that poster. It was created by The Legion of Saint Joseph. They’re the same crowd that dropped a leaflet into our mailbox back in 2012 urging everyone to vote no to the Children’s Rights Amendment referendum that year. 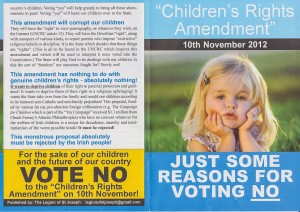 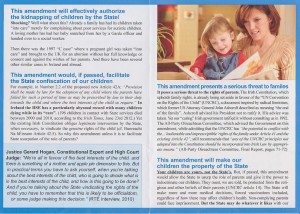 Well, wasn’t it all true? Hasn’t the country descended into “decadence, anarchy and totalitarianism” since that referendum was passed?

Children have had their parents arrested for imposing “restrictive” religious beliefs haven’t they? Didn’t you hear that the Gardai marched into mass last Sunday and dragged out some local parents who had taken their kids there? It’s terrible the way the country has gone since April 28th when this amendment was finally made into law in this country.

Yeah, bet you didn’t know April 28th was the day did you? I only found out when I looked it up on Wikipedia. Not a peep out of the usual suspects.