On May 22nd there will be a referendum in Ireland asking the population of Ireland to vote on a small change to our constitution:

Frances Fitzgerald TD, Minister for Justice and Equality, has today announced the wording agreed by the Government for the constitutional amendment on Marriage Equality. The wording is contained in the Thirty-Fourth Amendment of the Constitution (Marriage Equality) Bill 2015 which was today approved by Government and which will be published in the coming days.
Minister Fitzgerald said: “People will be asked to decide whether the following new wording should be added to the Constitution: ‘Marriage may be contracted in accordance with law by two persons without distinction as to their sex’.”

And yet some very important inequalities remain. For example, Civil Partnership:

Voting no won’t make any difference to the person voting no but it will hurt others, as Dara Ó Briain put it in a recent tweet:

The best thing about campaigning for a "No" vote in the #MarRef is, even if you lose, it will make no difference to your life whatsoever.

Please take a few minutes to read what David Norris has to say about this referendum on equality.

I’m glad I don’t drive to work. The No campaign put their posters up today and they’re disturbing the upsetting in their desperation to get people to vote no. I’d be raging all the way home if I had to drive past them. 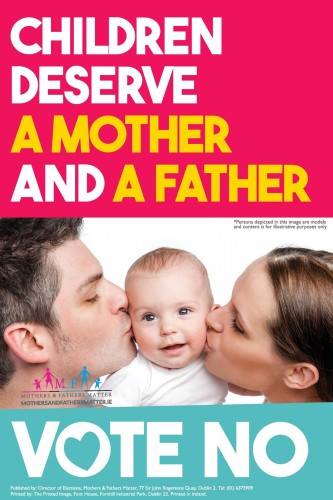 There are so many reasons to vote yes to this referendum. Here’s a few that Facebook user Tony McCarthy posted:

Seeing the blatant misinformation in the No posters gone up today has my blood boiling as it’s an attempt to hoodwink the population. The point about surrogacy on one of them is downright idiotic as surrogacy already exists and there won’t be battery farms for the production of gaybies.

Annoyed me so much I’ve decided to counter every argument I’ve heard. If your views can’t stand up to scrutiny then the problem isn’t with the scrutiny.

1-The referendum has nothing to do with adoption. This was already passed under the Children and Family Relationships Act 2015. The No Campaign’s posters, and many arguments for a No vote, are a deliberate misrepresentation of what the referendum is about.

2-The point raised about the “ideal” of a traditional family is moot. We live in a world where there are single parents, divorced parents, stay-at-home fathers, inter-racial marriages, adoption and surrogacy. The referendum is about recognising a union which has significant implications on, among other things, tax benefits, hospital visitation rights, and inheritance. This doesn’t affect you; it only affects the parties concerned.

5-Legalising gay marriage will not have an affect on the Church as the referendum relates to the State’s idea of marriage. No church can, or will, be forced to perform a ceremony which is contradictory to its beliefs. However, the next point addresses the Church’s changeable stance.

6- In addition to heterosexual marriage ceremonies in ancient Christian church liturgical documents, there were also ceremonies called the “Office of Same-Sex Union” (10th and 11th century), and the “Order for Uniting Two Men” (11th and 12th century). These, and similar unions i.e. between two women, are recognised in Church archives up until the 18th century.

8-Marriage equality cannot be seen as a precedent for other ridiculous ideas which have been put forward to argue against it e.g. the foolish argument about allowing a man to marry an animal. The referendum is specific in its wording: “Marriage may be contracted in accordance with law by two persons without distinction as to their sex.” This does not change the legal age of marriage, nor the laws regarding what types of marriage are illegal e.g. incestuous.

9-The argument that it is “unnatural” has no basis. In nature, homosexual behaviour has been observed in everything from bugs to bottle-nosed dolphins. It has been directly observed in hundreds of species. 10% of rams refuse to mate with ewes but will do so with other rams.

10-“Marriage has always been between a man and a woman” falls down on its premise that the status quo should always be maintained. If this were the case then women wouldn’t have the vote, slavery would still be in widespread existence in the Western World, medical treatments would still be treated with “magic” and prayer, inter-racial relationships would be forbidden, the modern technological era and the industrial revolution would never have come about, and the development of humanity would stagnate.

Update on May 18th: A leaflet from the Iona Institute was dropped into our mailbox this morning. I’ve upload scans to Imgur here but here are smaller versions of them. I hope to look back on this blog post when I’m an old man and be thankful that the Ireland of 2015 is ancient history.