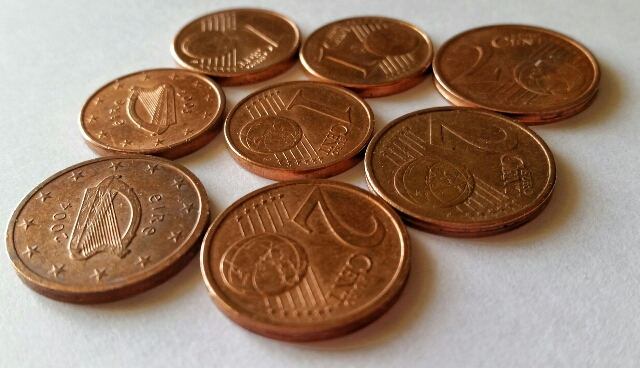 Finally! These tiny coins will be on the way out if all goes to plan.

I guess I should add those coins above to my small stockpile of Irish coins.

Government sources have told the Irish Independent that the matter is to be brought to Cabinet tomorrow.

It is understood Finance Minister Michael Noonan will bring the memo recommending the withdrawal of the coins, which cost more to mint than they are worth.

So long guys! (via RTed by troopstorm)

World markets might be in freefall but here’s a reminder of better times. On January 1st 2002, Ireland changed it’s currency to the Euro along with the 14 other countries in the Eurozone. Price increases followed as retailers “converted” their prices from the Irish Punt to the Euro. The economy went into overdrive as cheap credit flooded the market and drove inflation to sky high levels.

Still, it’s handy going on holiday to Spain and not worrying about converting currency any more. If only we could afford to go on holiday again .. In this gallery are each of the Irish coins and the £5, £10, £20 and £50 notes that were legal tender until February 2002. More information about the changeover can be found on the ECBI Euro website. I also have a ten shilling note from 1963. Anyone remember those?

The US Dollar has been steadily falling in value against practically every other currency for the last few years. This is the 5 year chart for the Euro vs US Dollar. Depressing isn’t it? If you’re selling into the US you would have to raise your prices by 30% just to make the same income you did in 2003, and that’s ignoring inflation. That Google Adsense cheque is worth less and less every month!

In preparation for the day when the US Dollar is worth practically nothing, a new bill will be introduced. The Zero Dollar bill will make it easier for US residents to realise how much buying power their currency has. It’s the perfect currency really. The Fed can print billions of these bills and it won’t affect the Forex markets. It is expected that the US will attempt to adopt the Euro as it’s primary currency shortly afterwards but will be rejected because their national deficit is above the 3% required for membership. (via)