Yes, it’s bonfire night again. Driving past the Blackpool Shopping Centre I counted at least 3 thick plumes of black oily and dirty smoke rising from close by. I hope nobody lighting fires around the city objected to the incinerator in Ringaskiddy, those fires probably released more toxins and chemicals than a year of incineration.

Thankfully this year there wasn’t a fire locally. Last year’s bonfire was quite a spectacle but I’d hate to think of baby Adam breathing in all the crap released from burning tires and sofas. Anyway, the good people over at PROC are discussing the night and reminded me that I had researched the origin of the night a while back.

Driving down the Commons Road also proved to me the futility of yet another road safety campaign. At one end of the road a crashed car is displayed for all to see. It doesn’t seem to make a blind bit of difference to drivers as they speed along at 60 to 80kph in a 50kph zone. Granted, the road is long and straight and served by two lanes in either direction but that’s not the point. There are always some pedestrians walking along there. I do admit a certain amount of satisfaction when I inevitably catch up with the offenders at the numerous traffic lights. I bet this busy road will be the location of at least one speed camera when the 600 are introduced in the future. 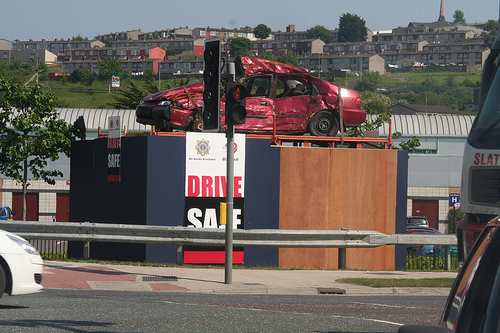 I need to read and absorb 5 Powerful Reasons to Drive Slower, and How to Do It, driving with speeding maniacs on the road has never been a serene experience for me. (via Dave’s Picks)

5 replies on “Pillars of black smoke rise above the city”

How on earth did they manage to light the bonfires, let alone keep them burning with all the rain we have been having?

Interesting point about the incinerator.

The rain wasn’t too bad early in the evening. The day is a bit of haze for me because I was ferrying people and bits and pieces back home after getting the place rewired. I never realised how revitalising a nap in the middle of the day could be!

Nope, never heard of that game in fact. Is it this one? http://en.wikipedia.org/wiki/Anno_1602

I don’t have much patience for RPGs and civilisation type games!

do yous have bonfires on halloween aswell?is this a dying tradition?