How many backups do you have of your important files? I have several backups of my photo archive:

* A local rsnapshot (incremental) backup made every six hours.
* A local copy of my photos directory, which is a straight copy, including deletions. Synced daily.
* A copy on another server synced daily.
* An online cloud backup on Backblaze.

And I still managed to lose a few days worth of photos.

Late last month I took delivery of a new 8TB external drive. I benchmarked it and it was just a bit better than any of my existing drives so I decided to make that the primary location for my photos. I called it “cats”.

Previously my photos lived on a drive imaginatively called “data”, but that would now become my secondary copy.

With my photo archive copied over (all 2.3TB of it), I edited my backup script so it would not accidentally erase my photos on cats, especially not any newly imported photos. I updated rsnapshot so it used cats rather than data, and made sure that Backblaze was backing up cats too. It all looked like it would work perfectly!

The next day I didn’t take any photos, or the next, I took a couple of photos with my phone but didn’t transfer them to my laptop immediately. Then one morning I took a photo of the sunrise, and the following day I did the same.
I edited a few of the images and uploaded one on the same day. Nothing wrong at all.
The next day I went into Cork to photograph Glow Cork and got some nice long exposure photos of the lights. I went in the next day on December 3rd and did the same.

I worked on a couple of shots, but I was busy, and didn’t have time to work on photos until this evening when my world fell apart as Lightroom reported it only had the smart previews for my latest photos. With a sinking feeling and forced calm I checked the 2017 folder. It all looked good, until 2017-11-19 that is. Nothing there after that.

I frantically checked my backup script again and again, poring over each line to make sure the right files were being copied to the right place but it looked ok.
I checked my rsnapshot folder. That should surely have the missing files. No. No, it didn’t.
I checked my other server and the files weren’t there either. They stopped at 2017-11-19.

Dumbfounded and a little desperate I started clicking on the end date in Backblaze, going back a few hours, then a day, and another day when I found something weird. I found my December 1st and 2nd photos, but not in the cats drive, but in the data drive!

I’d forgotten to update my Lightroom import preset. Lightroom was still copying my images into the data drive, and then my backup script would delete them the next day. Rsnapshot wasn’t backing them up either because it was now looking at the cats drive.

I started a restore of my December photos off Backblaze. The 3.7GB of data is still downloading. Luckily I hadn’t formatted my camera SD card so my December 3rd photos were still there too, waiting to be copied over again. Once converted to DNG, copied into place, renamed and metadata data updated, Lightroom was happy with those files.

I learned a lot about Backblaze. Without it I would have completely lost my December photos, including this one and the photo at the top of this post.

However, I could not find backups of photos shot from November 20th to 30th. Most of those were sunrise photos, copied to the laptop after the daily backup script had run so Backblaze should have had a day to back those photos up. The restore process offers hourly backups over the last two days, then daily for the next 7 days, then weekly going back a month. 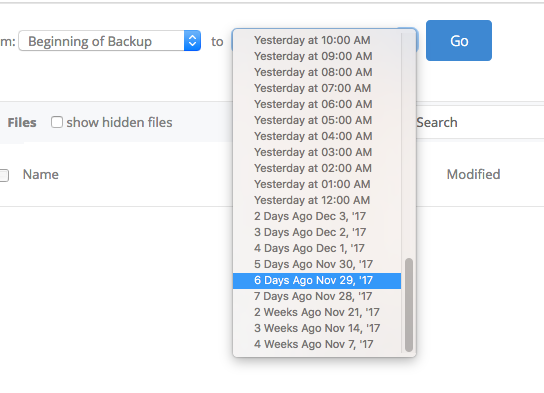 I suspect that Backblaze considered the daily backup done sometime around 7am UTC right after my backup script had deleted the files but that doesn’t explain how I was able to find my December shoot because that was past the hourly deadline. I need to contact Backblaze to find out why.

I still recommend using Backblaze. Last week several factors conspired to make my backup fail:
1. My DSL has a relatively slow 1Mbps upload.
2. I had my laptop unplugged from my external drives for several hours.
3. Backblaze doesn’t immediately back files up.

Then there’s the bad luck to find this problem after more than a week when Backblaze changes to weekly snapshots. It has it’s limitations but it still saved a bunch of my photos and I am very thankful to have it!