If that headline makes no sense to you apart from the “Galaxy S5” bit and you own that phone here’s why it’s important:

If you’ve had your phone for more than a year then you don’t really need to worry about Knox as your phone is out of warranty. You may not like the warning logo on bootup but how often do you boot your phone?

I found a great guide that explains how to root the Galaxy S5. You need to backup everything as your phone will be downgraded to an earlier version of Android that can be rooted and then upgraded again to an already rooted Lollipop ROM. You also have to splash out the $5 required for Mobile Odin Pro to flash Lollipop again without tripping Knox as it’s flashing a custom ROM. From what I’ve read, Odin running on your PC will trip Knox when you flash a custom ROM. I have no idea how the mobile version doesn’t. 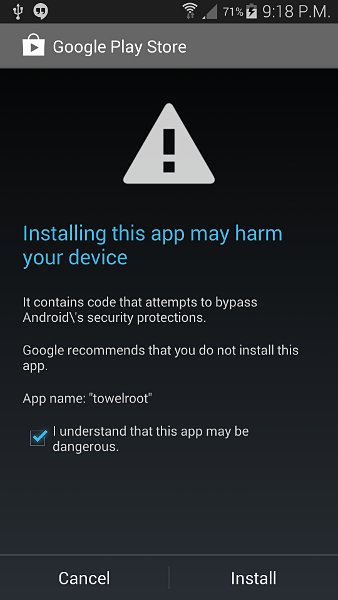 Installing Towelroot to root your 4.4.2 install of Android brings up this ominous message. I thought it was funny they didn’t escape the apostrophe correctly..

Oh, you’ll need several hours too. It took me an evening to do it which includes backing up files and apps and restoring them afterwards. If you use Google Authenticator, install Authy instead. It’s much easier to restore it. On the plus side, since Knox isn’t tripped, you can use KIES to restore your data!

A must-have app for Android users, rooted or not, is Greenify. It hibernates apps on your phone when you turn off the display to save battery. It works without root, but if you have a password or PIN on your lockscreen it won’t work automatically. You’ll need to use a launcher shortcut that automatically kills the apps when tapped. Facebook is always the first app I add to Greenify!

The Lollipop ROM linked from the guide above doesn’t have quite as much Samsung bloat installed by default. I use some of their software like the camera and S Health but now I can completely uninstall apps like ChatOn and almost anything else.

A final word of caution: you may soft brick your phone when you try to root it. It’s not for the faint at heart. It worked for me, but YMMV. Once rooted, apps have to ask for root permission, but once they have it they have free reign over everything so you have to be sure to only use root apps you trust.

As is usual with Murphy’s Law, as soon as I install a custom ROM there’s a new update from Samsung that brings back silent mode.

I’ll leave another comment here tomorrow morning if Llama has been able to get around the silence issue tonight.

I updated the ROM to BOC7 and Chainfire’s Flashfire and the difference is amazing! No more crashing launcher, contacts hasn’t crashed yet. No lag at all. Nice and speedy!
And silent mode back again in the form of a scheduled “do not disturb” mode!

I had my GS5 towel rooted and then I applied the chain fire one and let me tell you that my phone booted and took me to Samsung account screen and never accepted the password. I took it to AT&T and they tried different things and they could not fix it !!!
Does anybody of you had that problem before???

I’ve only rooted the international S5. Not sure about the AT&T variant. Have you checked XDA?

Updated to BOE6. Android is optimizing apps now, but posts on the XDA thread are encouraging.

[…] all the usual Samsung bloat. Some of it is useful but honestly, I could do without it. I managed to get rid of most of that when I used a different TouchWiz based rom but it didn’t leave much free space in the […]