WordCamp 2007 has just started and I’m there! Photos and posts are already appearing online and probably the best way to track them is by subscribing to the follow page’s feeds:

I’m posting photos to my WordCamp 2007 Flickr set. It’s growing slowly but surely and from my vantage point on the balcony I have a good view of the proceedings! 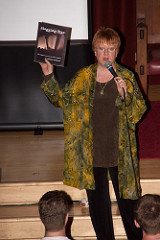 Half way through the day and I must say I’m enjoying Lorelle’s talk the most. (Edit – here’s a great write-up on her talk). I’m not very interested in podcasting but Dan Kuykendall’s talk on the subject might make me install his podpress plugin just to see what it’s all about.

Om and John Dvorak’s talk made me feel sick. I can’t imagine that most of the audience have problems with moderating too many comments. I know I’m overjoyed when anyone comments! And that comment about using the default WordPress theme made me angry. It’s not only new users to WordPress who use it but at least one established and respected blogger uses it and it hasn’t hurt how his writing is perceived. I felt a huge gap between what they were talking about and what I think about. Anyone else feel the same way? (eh Lorelle?) 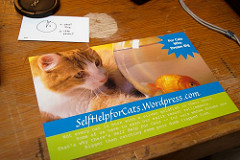 The Blog Monetization talk is just finishing up but I went downstairs for a walk about and took a quick look at the stickers and card table. This card from Self Help for Cats is definitely the best card down there. Go visit them for feline help!

New! Add your photos to the WordCamp Flickr group! Tag them with “wordcamp” and “wordcamp2007” too!

The Matt Cutts talk is great, I’ll post snapshots of his slides later! Biggest tip I’ve learned so far? Use dashes or underscores to separate out the words in categories or tags. Don’t join words. Update – text link ads are a definite no-no. Sites will be penalized.

6 replies on “Saturday morning at WordCamp 2007”

Welcome to SF Donncha! I am at wordcamp too 🙂

Hey Lori! Thanks for the comment! If you see me come over for a chat!

Thanks for the handy feeds.

I feel the same way you do about the default theme. There are plenty of people with worthwhile things to say who never install another theme, much less design one.

But don’t take that blithering fool Dvorak seriously. He actually said something like, “Your story has to have a factoidal basis.” I may have paraphrased but he did use the word factoidal. Just consider everything he says a factoid: something vaguely resembling a fact, but not necessarily factual!

I’m not at WordCamp today so I’m off to read your Sunday post.

Great summary, Donncha! And I love the photographs. I’m still reeling and struggling to catch up with all the fuss and the fun, then heading out to the Pacific coast with my camera for a few days as I head back north.

Travel safe, my friend, and thank you. You have been forgiven for losing my posts, but the future post thing…hmm, that still needs more apologies. Send chocolate. 😀

[…] together links like Charles Stricklins wrapup post about Day 2, and Donncha’s Two Posts (Saturday & Sunday). I will still post a couple more times as the videos of the presentations are posted […]

[…] my page rank to 4. Initially I felt angry and shocked that this happened but I have no excuse, I heard it from the horses mouth, I knew it was coming. I was one of those evil unscrupulous demons who manipulated the pagerank of […]