My brother Donal who I mentioned a few days ago is going to Lesotho in mid-April to help build a school and raise funds for the ISPCC here in Ireland.

As part of his fund raising effort there will be a charity trad gig on Wednesday night, that’s tomorrow night! Sounds like a great line up and I’m going to try get in for an hour or so. Watch out for the guy in the WordPress tshirt with the camera. That’ll be me! 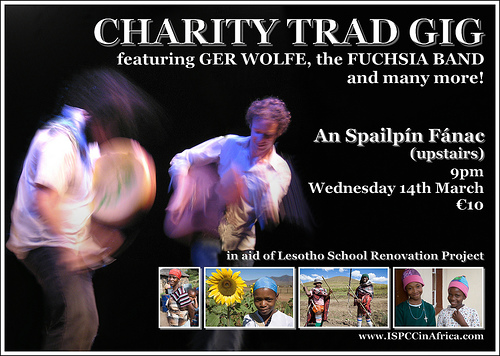 Performers on the night include The Fuchsia Band, back from their travels and who always put on an energetic and entertaining show; Cork singer Ger Wolfe singing some of his distinctively Cork ballads; Dan O’Callaghan, a piper from Cork who has travelled around the world playing music; Tommie Cunniffe on accordion, who is currently recording his debut album; and, last but not least, John Mitchell on flute accompanying Donal O Caoimh on the uilleann pipes.

Update! The gig was great. A huge crowd gathered to watch and listen and we even had a few dancers! I hope to post some photos tomorrow if I find time to work on them tonight.